Tooling down the road one day in May 2012 on a photo drive, I  spied some railroad cars that seemed out of place.  They were off the road a couple hundred yards and seemed to be on their own little spur line next to the main line immediately behind them.. 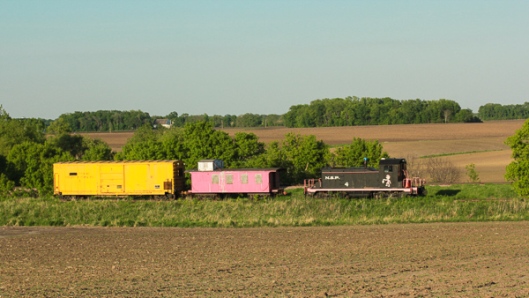 Railroad cars that caught my eye.

The cars really stood out, these days bright yellow cars are rarely seen and even less so, pink.  The sun was hitting them nicely and the colors popped and got may attention.  I got a couple of photos and started looking around.  There was a gravel road that ran on the other side of the property, so I decided to take a look a little further.

Looking for a place to turn around to go back to that gravel road, I turned into a driveway near a motel on the top of the hill.  Here I found several more railroad cars in various states of repair.

I then headed back to the gravel road.  Once I got there I saw a building and what looked like a building on a dolly.

At the time I didn’t know what to make of all this railroad paraphernalia out in the middle of nowhere.  I thought perhaps it was the work of a train enthusiast and I was right, though I didn’t know it until yesterday.   I had these pictures on my hard drive and had not thought much about them.  I was reading a blog a I follow and that led me to figure out just exactly what I had photographed.   I was reading a blog talking about Willy Wirehand.  Totally unrelated to trains you would think, in that six degrees of seperation way, one thing led to another.

First, Brian Brown’s excellent Vanishing South Georgia blog talked about Willy Wirehand and dropped a link to Willy on Reddy Kilowatt’s site.  While reading about Willy on the Reddy Killowat site, a link caught my eye, Kilowatt as a real Railroader.  The post talked about a locomotive purchased by NSP (Norther States Power, – today known as Excel Energy) from Burlington Northern Railroad in 1973 to switch its St Paul, Minnesota coal-fired High Bridge power plant, where it worked until 1996.  Later NSP donated the locomotive to the Gopher State Railway Museum.  So I looked that up and realized that what I had photographed was actually the Gopher State Railway Museum near New Prague, MN.

Gopher State Railway Museum is a non-profit corporation that was incorporated in the State of Minnesota in 1990 to educate the public through collection, preservation, restoration, display, and operation of railroad equipment and artifacts.

GSRM’s goal is to educate the public about the railroads that helped create the State of Minnesota we live in today as well as the stories of the people that built, operated and used those railroads.

They’ve been busy and things have changed since the photos above.  The “building” on the left in the shot above is actually an office car, Office Car Manitoba to be specific.  It was built by the Pullman company for James J. Hill of the St. Paul and Pacific Railroad which by now he had grown to the St. Paul, Minneapolis and Manitoba Railway.   There is a lot of good detail about the car to be found on the Museums site linked above.

The state of things today

I decided since this museum is less than an hour away, I would make a little photo expedition in that direction and see how the museum had progressed since I’d last been there a couple of years ago.

Above is what it looks like from the road today. 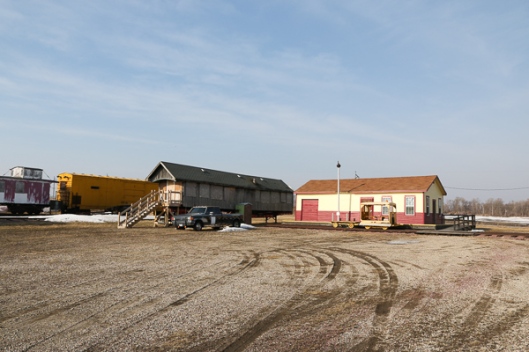 Gopher State Railway Museum with Manitoba car on the left and even more cars on the left [March 30, 2014]

They’ve made good progress on the main building and moved some cars that were on the spur line before into the yard.  There is much to be done yet.  The organization is looking for donations of time or money and registered as a 501(c)(3).  So if you feel inclined to lend a hand or a few dollars I’m sure it would be appreciated.  Their “how can I help page” lists many ways to get involved. 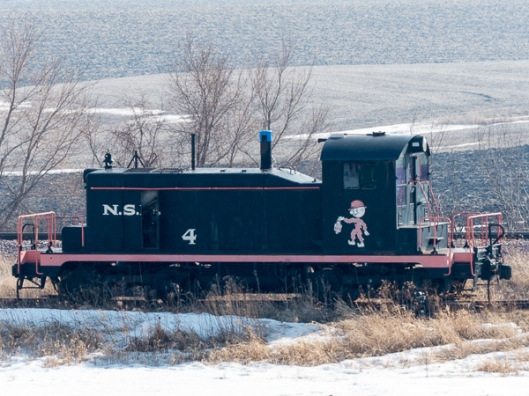 So I mentioned Reddy Kilowatt and how it led to my discovering this Museum.  Above is a shot of the locomotive featuring Reddy that NSP donated to the Museum. 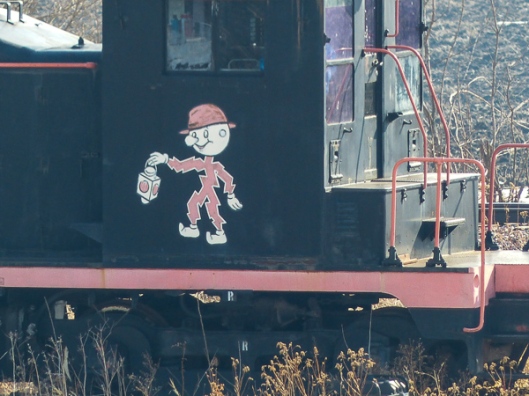 Another one of Reddy.

From the GSRM website In the 1980s, NSP sold the rights to Reddy Killowatt and his image was supposed to be removed from all company equipment, etc. The High Bridge crew couldn’t bring themselves to paint over Reddy so they ignored the memo. 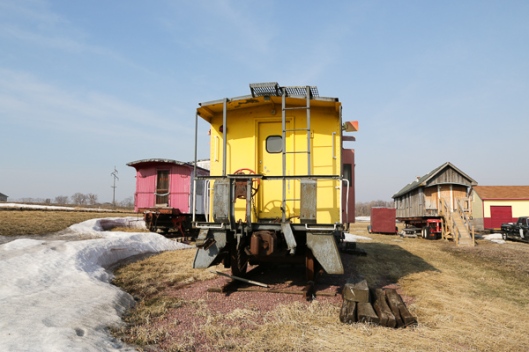 Other cars on the property in various states of restoration.

Cars that looked like they served to lend parts to other cars were also on another part of the property. 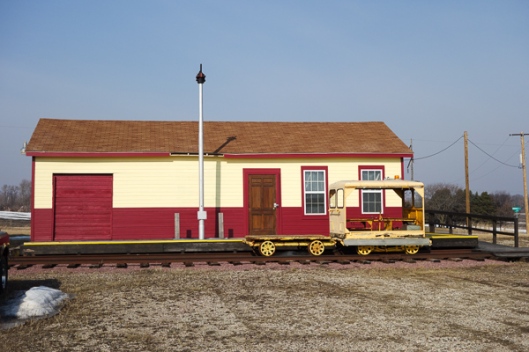 Close up of the Fairmont Gang Car

Gang cars were used to move crews around for maintenance and other things.  They were replaced in the 1990’s with pickup trucks with flanged wheels that could be lowered onto the tracks.  Probably a welcome replacement during bad weather.  Why was it called a Fairmont gang car? 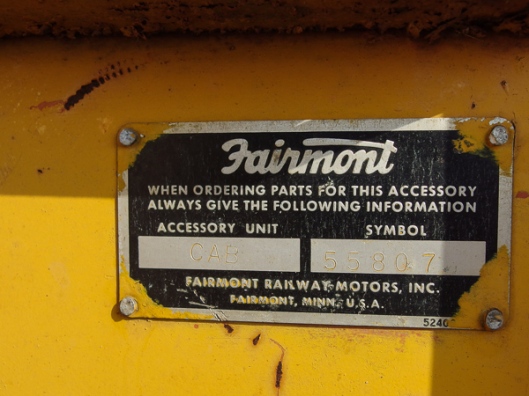 It was called a Fairmont because that was the name of the company that built it and the company got its name because of its location, Fairmont, Minn.  More information can be had on Wikipedia about the Fairmont Railway Company.

I was glad I took the time to go back today and look around and see the progress that has been made.  I look forward to seeing what the organization is able to accomplish they have a lot of ambitious projects listed on their website.  I really hope they get the resources to complete them.

This summer I’m going to make another trip on and try to take a real tour of the cars.  They don’t have regular hours but groups and individuals can call ahead for an appointment or are invited to stop in if you see folks working.