Scene from a small farm community

At first glance this doesn’t look a lot different from some of the other photos I have here.

This photo tells a story, or in some way has a hidden story within.  As I was going through photos to post here I ran across this one.  As I sometimes do, I realized I shot it all wrong to tell the story.  They say a picture is worth a thousand words.  That might be how many it takes to tell you this story.  Mostly because I shot this photo all wrong.  I was after a shot of a small town street.  A common stand in the middle and look down the street shot.  And I got it.  Sadly.  It could have been much more.

This is a typical small town out in farm country.   It’s slightly, only slightly more country than most.  It has gravel streets and when you park, you mostly just make sure you’re out of others way.  A lot of times what parks on these streets can’t be angle parked to well.

So there are several vehicles parked on the side of the street.  Two of them loaded with fresh hay and one pulling a trailer.  On another day of the week these vehicles would be on their way to their destination.  But, it’s Friday in Sherman and that means something.

What you don’t see, on the right side of the street there is a bar and grill that has a steak fry on Fridays during the summer.    Judging from the amount and variation of vehicles  I saw, the steak fry means get there early, get there what ever way you can, because the food is good and all your friends are there.  There were tractors, pick-ups, cycles, cars, farm trucks, you name it all parked around the steak fry.  It was only ten past five and it was already getting busy.

It’s funny when you don’t see the picture at the time, but after time has passed the photo jogs you’re memory as to what else was going on that wasn’t in the photo and then you realize that what was going on would have been the better photo. 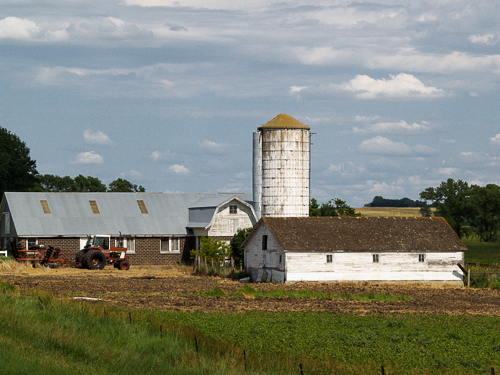 This is what early summer, June 22nd to be exact, looks like in Eastern South Dakota.  The clouds promise rain somewhere East of here and it will be welcome.

I was really something, still am in some ways.  I’m made of oak timbers that have weathered all the storms the prairie could throw at me.  My silo stands steadfast at my side.  Between us we can house the animals feed them, keep them out of the elements, provide storage for hay, machinery and other “stuff”.  I’m on in my years now, but as I look out I see green grass, the same kind that used to fill me with hay.  I see clouds that may bring some water, but hopefully not much wind.  I don’t like the wind as much as I used to.

The Old Homestead Near Garretson, SD

When was this abandoned?  Why?  What are some of the hardships the farmer or rancher and family endured?  This is near Garretson, SD, so we know the winters were no picnic and the summers were certainly warm enough.  The land itself in that area is suitable for horses or cattle.   It is also beautiful land with big rolling hills and plentiful trees to seek shelter from the sun for a bit.  Wish I had seen it 50 years ago or so.